Download Add to Lightbox Buy Image
Image 1 of 1
In this vintage 1955 photo the University of Texas Longhorn Band plays during half time show as Big Bertha, the worlds biggest drum and US Military Color Guard salute.jpg 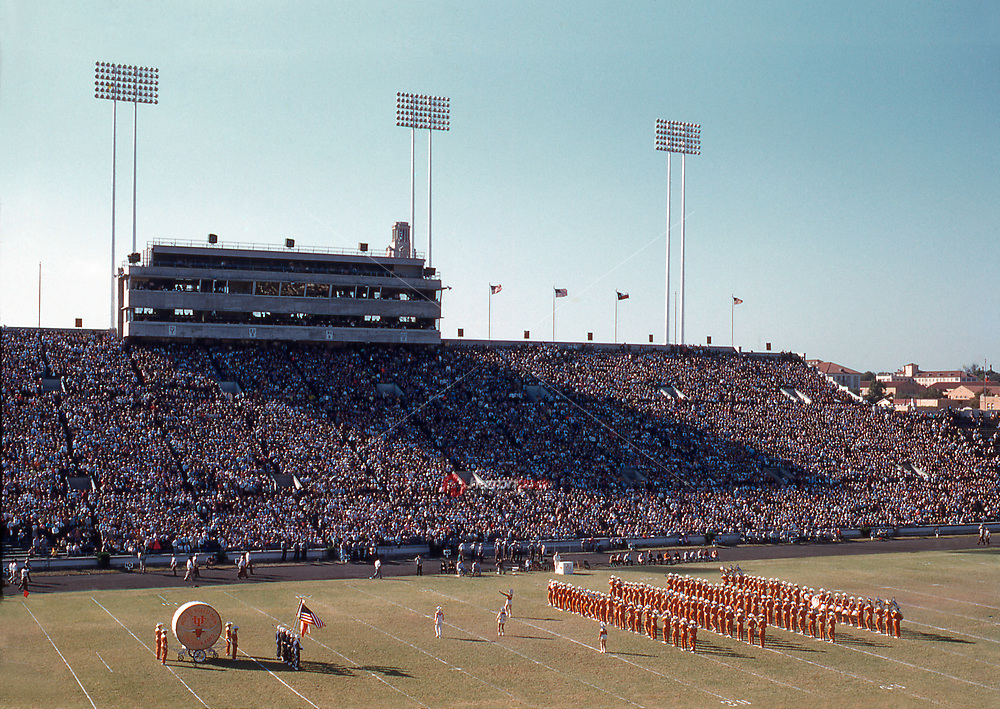 The Big Bertha drum was named for the Big Bertha Howitzer, a German cannon used in World War I, and its low rumble punctuates each University of Texas football game. Known as the “Sweetheart of the Longhorn Band,” it was originally commissioned by the University of Chicago in 1922.

C. G. Conn Ltd. built the drum from the largest animal hides they could find in the Chicago stockyards, and the completed drum was so huge that part of a wall had to be removed just to get it out of the factory. Used at the Chicago football games, Big Bertha also made a trip to New York at one point in 1938, just to play one note in a performance of Verdi’s Requiem directed by Toscanini in Carnegie Hall.

When Chicago’s football program was canceled, the giant bass drum was abandoned beneath the stadium. During the 1940s, scientist Enrico Fermi worked on the Manhattan Project in the stadium, creating the first nuclear chain reaction. The atomic bomb research left the big bass drum radioactive.

In 1955, a wealthy Texas oilman and UT alumnus bought the drum for $1, believing that Texas should have the biggest drum in the world. The oilman “strapped that sucker into a trailer” and drove it all the way back to Texas, where it was decontaminated and restored before being donated to the Longhorn band.

Big Bertha measures roughly 44 inches wide and 10 feet tall and weighs more than 500 pounds. The exact measurements are kept under wraps, as both Texas and Purdue claim to have the biggest bass drum in the world, and the debate over which university has the biggest bass drum in the world has yet to be settled.
© 2019 Herron Stock LLC; all rights reserved
University of Texas Longhorn Football - Vintage Photo Image Gallery, Vintage Retro Historical Austin, Texas - Images, Stock Photos & Prints | HerronStock
Authentic Austin, Texas stock images. View all galleries »
CONTACT